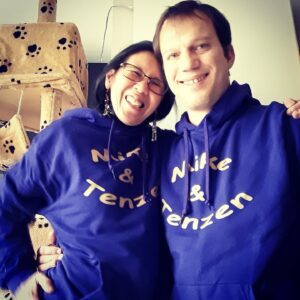 Mike Ianosi is a singer and song writer and acoustic music passionate. In his youth he played piano for 2 years. He started playing music seriously in 2003 with the bass guitar and played with several bands. In 2012 he began playing the didgeridoo (of which he is passionate) and other percussion instruments like shamanic drum, gong, jaw harps, xylophone, and strings instrument like the irish bouzouki and guitar and the chinese violin erhu.

Tenzen Hu began music in 2015 with the flute recorder, and slowly, grew her collection to clarinette, harminic flute, hulusi etc… Since 2018 is taking medieval singing classes and piano.

Mike & Tenzen is a duo band of Mike and his friend Tenzen. They met the first time in April 2019 and quickly formed a band combining the shamanic style of didgeridoo music, and folk style of which they are both passionate. In September 2019 they recorded their first album Vibrations de l’Univers.

Mike & Tenzen strongly believe in the benefits of a calm and comforting environment which they create with their presence and acoustic and vibratory instruments.

Please subscribe to our social networks to support us and share and spread our music. You can also support us financially with tips on tipeee